Well, where does one start to talk about the Infinite and one's finite and limited relationship to It?

I found Asana Bear some years ago when I started toying around with yoga. While our politics are nearly opposite, our dietary choices are complementary. I'm a gleeful omnivore, while he is strictly vegan BUT he has some of the best recipies for "food that food eats" that I've come across. Conversion by stomach, as it were.

So I read his blog. And post in his comments. And sometimes engage in a debate via e-mail, where we shake hands, salute the spark of the Divine in one another, and agree to disagree. I'm not seeking to gain his approval by making him agree with me, and I think the same is reciprocated. I am looking to enlarge my viewpoint by reading his words, digesting them, and refining my views by defending them. Sometimes it's hard to know what we think until we hear or see the words.

So, getting 'round to the title subject at long last. Asana Bear has found God (under the couch with the cat toys, as I've been telling him for ages. That's where everything that is lost is eventually discovered). A little more seriously, Asana Bear relates that he had the bog standard church experience of lectures on Sunday where the preacher told you what your relationship with the Infinite Should Be (and presumably, how you were fucking everything up. Why is it always about ME???)

And see, I can relate in some ways to this, having had the Mystery Conversation with friends about their upbringing (one specific that comes to mind is Lynchpyn, actually, where after a nasty misunderstanding we sat and talked again (almost a year later, granted) and she explained that she had the Arranged Marriage relationship with the Great I Am, where the man stands up in the pulpit and tells you that anything that is remotely fun is Wrong and will lead to Eternal Damnnation and you should Quit That Immediately.)

Just like an arranged marriage, where people who presumably have your best interests at heart hand you over to a demanding incomprehensible rule-bound Being whose sole interest seems to be putting up arbitrary rules for you to follow, and then insisting that you must love this Being, that you're going to be together forever and you shouldn't try to understand, just OBEY.

Here's the thing though, my experience was different. I was raised by wolves by a lapsed Baptist who found faith in Science of Mind teachings (as opposed to the Scientologists *spits through forked fingers* (yes, I have unresolved stuff around them, sigh)) and a Rosicrucian. So I had a more metaphysical/mystical upbringing than most, where questioning one's place in the world and one's relationship with the Great I Am was, if not expected, then certainly acceptable1.

Yes, this was a Pustulent Ball of Suck in a community full of Catholics and Lutherans, with clearly labeled religions and icons of faith to point to and thump. But as I became older, I see that this actually provided me with tools to grope after understanding, limited though it may be, and gave me a spiritual life NOT predicated simply on proximity. (God as Work Buddy, anyone? What happens when you change employers, and can't make plans around the water cooler any more? When you have to put actual effort into the relationship?)

Given the demands for submission to rules and regulations that seem like no more than buzzkill whimsy at the time (and given no explanation for the same), and the increasing demands for limited time as we get older and our choices expand exponentially, is it any surprise that some people run for the exit as soon as they can walk??? And aren't particularly interested when you talk about your buddy, the Divine who loves to dance, and finds joy in the color purple, and who won't give you everything you ask for, but can help you find what you need?

Because all they can see, when your great friend the Divine comes through the door, is that he has the same face as their Awful Being, and so they scoot to the opposite end of the couch, make stiff small talk, and bolt for the door as soon as it's polite to do so.

And so my heart is delighted for Asana Bear, my other virtual friend, as he takes the next steps on his Mystery Walk and comes round to where he had left off before.

1. In high school, one of Li'l Brah's classmates played a particularly sophisticated joke on him--they sent the Mormons to our house to discuss Li'l Brah's relationship with Jesus. And so they wound up with Li'l Brah on the sofa for--no kidding--an HOUR talking his ear off about their beliefs.

And the 'rents and I? The Dowager Empress and I bumped into each other in the hall, and essentially agreed that, well, if this was the path that called Li'l Brah, then who were WE to argue? *shrug*
Posted by Spike at 9:32 AM 2 comments:

In re: the previous "F is for . . ." post, one Tonstant Weader weighed in with a real life comment that she was going to post a note that my plan sounded, in the words of her esteemed father, "Fine as froghair!" but she doubted anyone would get the reference. Would the rest of you please weigh in on the comments if you do indeed "get it?" Thank you.2

With all that clarified, on to the current blog post:

Thorax has been sitting in the corner, sighing loudly and clearing her throat to let me know She Is Not Amused. Or Pleased. (Divas! Can't live with 'em, can't live without 'em.)

It seems that I have not one, not three, but FOUR finished objects, and no pictures of the Divine Ms. T showing them off. This, according to Thorax, is simply unforgivable.

Swan Lake from Pink Lemon Twist Patterns. Beads and assymmetry, what's not to love? This goes with a knitted mask to this year's Lyhr Masked Ball. Pictures of that to come much later.

Thorax wanted a strutting-down the runway shot, so I obliged her. Unfortunately, the color of the shawl rather matches her complexion (like the eastern socialite with the beige dress, beige hair, beige skin, and beige teeth) so some of the detail is lost. 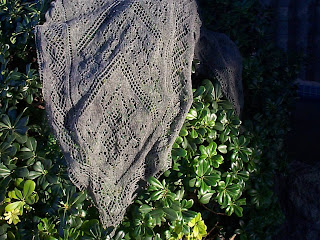 The beads do not show up well, in part because they ultimately rely on movement by the wearer and shifting light to twinkle and catch the eye. Thorax is a wonderful model, very patient even as one fiddle with lighting and position. Unfortunately, she is . . . lacking in animation, to a certain extent. She'll need to work on that if she wants to make it in the big leagues.

Next up is Wabenschal from Knitting Delight. I added the beads when the lace looked a little plain. This is destined to be a Christmas gift to a dear friend; I believe in getting gift knitting done early. 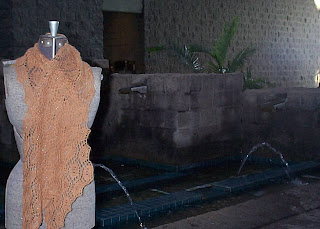 Thorax found it amusing that it was a camel blend and camel colored. I don't get her sense of humor sometimes. It was hard to get her to stop giggling and making faces for this shot. I almost made her stand in the fountain. Almost.

Another scarf, the Triinu from Nancy Bush's latest, Knitted Lace of Estonia. Another goodie for another friend. I was busting stash when I made this, I had no idea how much of this yarn I had. 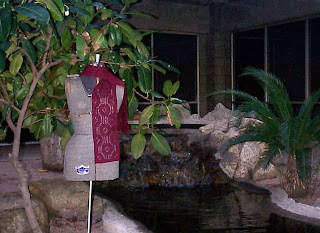 Honestly, I thought I'd kill most of it in this scarf, but I had a bunch left, so I made this for me: 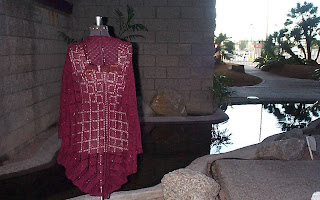 Bad Cat Designs's Autumn In New York shawl. I even had enough yarn to make it a generous, expanded size. In fact, I had to order MORE beads a little less than halfway through. Simple lace, lots of beads . . . siiiiiiigh. Is there anything better? I think not.

And now Thorax has had another installment of her fifteen minutes of fame, so she'll probably let me finish knitting a pair of *whispers* fingerless gloves *returnes to normal volume* for a friend who plans a long chilly hike up the Inca Trail. I'll try to sneak pics past Thorax.

Jealous models, and all that.

2. Yes, I suspect this is whoring for comments. Feel free to weigh in on that aspect as well, if you like.
Posted by Spike at 7:01 PM 2 comments:

Today tastes like fennel and frumenty, falafel and feathers.

I had a post ready to go, but it needed some pictures. Lovely late winter in Arizona day, several finished objects, model champing at the bit . . . and not a single battery in the house.

So I'll be on the back porch taking in the sun with a glass of wine, an audiobook, and a lace knitting project. Pictures shortly.
Posted by Spike at 1:33 PM 1 comment: