I loves me a time-bound knitalong (KAL), as all y'all know, where the participants select a project and then click away in an attempt to beat the clock. I'm the world's worst participant in a KAL where we're all making the same thing--I don't think I've ever managed to start at the start or finish near the finish--but give me a deadline and I'm golden.

So when Ravelry annonced the Ravelympics (winter 2010) I was so there. A chance to join a team and win some pixels? Count me in.

So I signed on for Team MmarioKknits (Mmario is an internet famous designer of amusing lace shawls--come join the beta-knitting fun at MmarioKknits) and planned my project--a double-down triangle in a variegated purple with the sober appellation of Li'l Bunny Foo-Foo. Yes, as in hare today, goon tomorrow.

17 days to knit a lace shawl, starting with the lighting of the Olympic torch and ending at midnight the day of closing ceremonies. Made it, with time to spare: 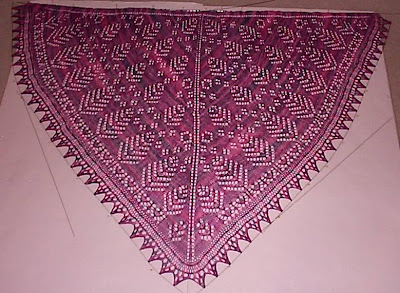 And, by virtue of completion before the deadline, won the following:

Next up, a personal challenge to knit a shawl for Lent. (Why yes, I know we're two weeks through the season. When has common sense ever stopped me? Have I told you about the lace stockings I plan to knit for the World Cup? I tell ya, Christmas knitting projects may be a piece of cake after this year of intensive training.)
Posted by Spike at 10:25 PM No comments:

Is it just me, or do I hear "Fanfare for the Common Man" ringing out already?

Must be me; it's another 14 hours and 45 minutes to the lighting of the torch.

55,017 by my processor's count--in 25 days. And a lot of filling in to do before we have the first glorious imperfect draft. < goosebumps >

I was working on a story, beads of blood forming on my forehead. My muse slouched in, dropped into a chair. He gestured with the apple in his hand. "Vat's wrong?"

"I've picked all the low-hanging fruit."

He took out his boot knife, cut off a slice. "Eventually, sveethott," he said, "Ees all low-hengink fruit."
Posted by Spike at 4:11 AM No comments:

I've always subscribed to the "tortured artist" theory of creation. Probably got that from when I was a wee impressionable tadlet watching Sesame Street. There was a sketch where Kermit the Frog was doing his frog in the street interviewing schtick with a pianist who was attempting to work out the lyrics to "Mary Had a Little Lamb." The melody was fine, but he was having trouble finding a rhyme for "snow."

Remember that? Here, I'll help you:

So yeah, of course my takeaway was NOT the helpful bit about "if it ain't working, change it" but the whole wallowing in frustration because if you aren't frustrated then you're not really creating.

Therefore, if you're not frustrated, then you need to add some . . . hurdles!!! Because it's all about the getting bent out of shape and wacking your head on the keyboard. Hence, this has been my M.O. for many many many trips around the sun.

Of course, this didn't ever stop me from envying those who were able to create effortlessly. I would moan about how it looked so easy for so-and-so, and how I wished I could make that happen so gracefully, and cry about how hard it was for me and how the olny reward was that my product was pretty darn spiffing.

But seriously, when you've convinced yourself you need to bind yourself up in knots worthy of a yogini who's into japanese bondage before you can even put pen to paper (I must have an idea--no, an IDEA--in order to start, and it must be a WORLD-SHAKING IDEA, with complexity and subtlety and originality. And then I'll need chocolate, and a foot massage and a purring cat and some orange tea--and oh, look. It's bedtime already. At least I'll be ready to start in the morning.) then, no, it's not so surprising that your output is very very small.

Enter Christopher (Saint) Batty and NaNoWriMo. For years I've sat on the sidelines, wishing I could play--but copuldn't because after all, I'm creatively hobbled, right? Need to be able to work the whole thing from the top down, (even when I get stuck, even when I can't find my way into the hotel in the first place, never mind track down the Hospitality Suite where the story is waiting for me) can't skip forward to the bits I can see and hear as vividly as real life around me, can't do anything to make it easy because IF YOU'RE NOT BLEEDING ON IT, IT ISN'T A PROJECT. Ahem.

And o, was that ever fodder for the green-eyed monster. I lost two novels when a computer died and my files all turned to word salad. Gareth suggested I re-create them from what I could remember, and I turned him down because I had birthed every word of those pages (200+ and 400+) through my eyeballs (not even my forehead! Take that, Jove!!!) and there was no way I was going through all that again. That did not stop me from sitting in my sub-volcanic lair hating everyone during the month of November. Just so you know, in case you felt a scorching wave of rage and envy go boiling past you the week before Thanksgiving some year. That wasn't your mother-in-law.

So I got a wild hair this January (Abundance!) and decided I would write a 50,000 word story in 30 days. Of course I was going to fail miserably--I'm a delicate wittle fwower what can mebbe put out 50K words in three years, yah? But wotthehell, at last I'd have given it a running whack and I'd be able to retire any dream of writing anything bigger than a blog post and be done with it. (BONG, as she smacks her head on the keyboard.)

But EVERY DAY? For a WHOLE MONTH? That's a lot of chocolate and foot massages. < clutches chest, staggers about the room wringing handkerchief, gasps for smelling salts, collapses upon the fainting couch with hair arranged just so >

The whole rough is drafted all the way to the end. I have plenty of broad arcs that need to be filled in, and in the process of filling, I'm finding other bits that need a bit more specificity than "and then a miracle occurs."

Carl Jung believed that we were all created as happy heathy fully integrated beings who then learned to disown parts and pieces of ourselves as we grew up--and then spent the rest of our adult lives searching for those parts and pieces, yearning for integration.

I only thought I was showing up for the work before. For three weeks and four days, I have sat down at the keyboard with nothing else in mind than getting my 1,667 words for the day out--and hopefully, not cheating by writing "I can't do this" 417 times.

This changes nothing.
Posted by Spike at 1:19 PM No comments: